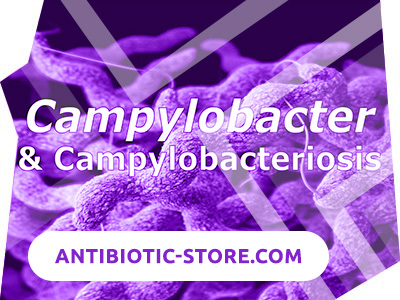 What is Campylobacteriosis in Children?

Campylobacterioses in children are diseases that are caused by campylobacter – conditionally pathogenic microorganisms, and which are manifested mainly by damage to the gastrointestinal tract. Campylobacteriosis is called campylobacter infection in the scientific literature.

Campylobacteriosis is mainly affected by weakened adults and children who suffer from tuberculosis, diabetes, hemoblastosis and other oncological diseases. In a special risk group are pregnant and young children.

Epidemiology
Campylobacter is quite common in nature. They often provoke diarrheal diseases in people of different ages. The infection is spread by domestic and wild animals, birds and sick people (children and adults). Campylobacter is isolated from healthy carriers in very rare cases (less than 1%). The main ways of transmission of infection: fecal-oral and contact-household. The causative agent is often found in developing regions, but in some cases – in developed countries.

At risk are children under 2 years old. Newborns are at risk of contracting from sick mothers during childbirth. Outbreaks of campylobacteriosis occur during all seasons of the year, but their largest number falls in the summer, when food products are most susceptible to contamination and infection. The incidence is sporadic and epidemic in nature. Epidemics provoke intake of contaminated milk (unboiled) and untreated drinking water. Nosocomial outbreaks occur due to infection from patients with various forms of stonebacteriosis.

Causes of Campylobacteriosis in Children

Campylobacters are most comfortable “feeling” themselves at a temperature of 4 ° C. their vitality slightly worsens at room temperature, and they die completely when the ambient temperature reaches 42 ° C. Some strains of C. jejuni produce enterotoxin and cytolytic toxins.

Pathogenesis during Campylobacteriosis in Children

Campylobacters through the fecal-oral or contact-household route enter the gastrointestinal tract, attach to the cells of the intestinal epithelial layer, colonize the mucous layer. Bacteria can pass through the intestinal mucosa and move along the epithelial cells. They can penetrate through the broken membrane of enterocytes and intercellular spaces of the epithelium. In the submucous layer of the small intestine, infiltrates are usually found, which are composed of lymphocytes, polynuclear cells and plasma cells. An acute inflammatory reaction is localized around the blood vessels in the glandular epithelium and crypts.

Endotoxin is released after the death of bacterial cells, it leads to hemorrhagic and necrotic skin changes in rabbits, which were infected with Campylobacter for research purposes. Enterotoxin, which is produced by campylobacter, leads to the development of secretory diarrhea.

After the transfer of the disease, immunity is formed.

The pathogenicity of various campylobacters is not the same. C. intestinalis is dangerous mainly for premature newborns and weakened adults, it causes a hematogenous disseminated infection with the formation of purulent septic foci. C. jejuni induces a localized pathological process only in the gastrointestinal tract.

Symptoms of Campylobacteriosis in Children

Among all clinical forms, campylobacter intestinal infection is the most studied. From 3 to 5 days the incubation period lasts. The average value is 3-5 days. The disease begins acutely, the body temperature rises to febrile. Muscle pain and general weakness appear. In half of young children, intense pain in the abdomen around the navel and in the right iliac region is recorded.

The stool happens 4 to 20 times a day and night. Feces abundant, watery consistency, have a color of bile. There is a small amount of mucus, the stool emits an unpleasant odor, blood streaks are often visible, less often fresh blood. In young children, hemocolitis is very often recorded.

In some cases, with intestinal campylobacter infection, core-like, scarlet-like and urticarous exanthema appear. Microscopic examination methods show inflammatory exudate and leukocytes in feces. The temperature keeps elevated only up to 3 days. Symptoms of general intoxication in most cases are weak, do not last long – from 2 to 5 days. Only in rare cases, neurotoxicosis is recorded. Diarrhea lasts 3-14 days. In less than 15% of sick children, stool normalizes at 3-4 weeks. The disease occurs in mild and non-severe forms.

Features of the disease in newborns
Perinatal campylobacteriosis is most often caused by C. intestinalis. In pregnant women, when infected with Campylobacter, the following symptoms appear: bacteremia, prolonged fever, necrotic focal placentitis. By placentitis is understood infectious inflammation of the placenta. In 40 cases out of 100, pregnancy is allowed by stillbirth or miscarriage, in 60 cases out of 100, a baby is born prematurely. Campylobacteriosis in newborns manifests itself 12-20 hours after birth – there is a fever, vomiting, diarrhea, respiratory distress syndrome.

Damage to the central nervous system manifests itself as meningitis or meningoencephalitis. Morphological changes include cystic degeneration and hemorrhagic necrosis of the brain. Newborns recover in rare cases, while a gross residual pathology is formed.

Newborns may develop isolated campylobacter intestinal infection. In this case, vomiting is not observed, body temperature remains within normal limits. Often there is diarrhea (moderate) – the stool is frequent and diluted, in the stool there is a slight inclusion of mucus and bloody veins. Signs of dehydration with isolated campylobacter intestinal infection are not observed, as is flatulence, abdominal pain.

In very rare cases, a generalized form of the disease is recorded, which is manifested by such symptoms:

Pericarditis, endocarditis, arthritis, meningitis, lung damage in the form of pneumonia or abscess may occur. Hematogenous disseminated forms of campylobacteriosis are difficult, deaths are frequent.

Diagnosis of Campylobacteriosis in Children

For the diagnosis of campylobacteriosis in children, pathogens from feces are isolated. If the form of the disease is generalized, the pathogen is also in the blood and purulent-inflammatory foci. Campylobacter is isolated on nutrient media that are used to grow brucella, with the creation of microaerophilic conditions. Rapid identification of the causative agents of campylobacteriosis is carried out using phase contrast microscopy.

Serological methods are used – they detect an anticampylobacteric antibody in RA or in RAC with a reference culture or auto-strain. On days 4–7, antibody titers begin to increase and amount to 1: 160–1: 640 and higher in RA. Using the indirect immunofluorescence reaction, antibodies of the IgM and IgG classes are determined separately. For a primary infection, antibodies belonging to IgM and IgG are typical in high titers, with repeated infection there are high titers of IgG antibodies only.

Treatment of Campylobacteriosis in Children

The course of campylobacteriosis is usually favorable. Antibacterial therapy is not required in all cases. Etiotropic drugs are used to treat sick children with a burdened premorbid background, with moderate and severe forms, especially in generalized forms.

Campylobacter is highly sensitive to nitrofuran derivatives (solafur, furazolidone), to macrolides (azithromycin, erythromycin), to aminoglycosides (gentamicin, amikacin), to chloramphenicol (chloramphenicol). These antibiotics reduce the onset of symptoms and prevent relapses and complications.

Basically, campylobacteriosis in children ends in recovery. The prognosis is unfavorable for generalized forms of the disease, when the disease sometimes ends in death.

Veterinary and sanitary control is important.